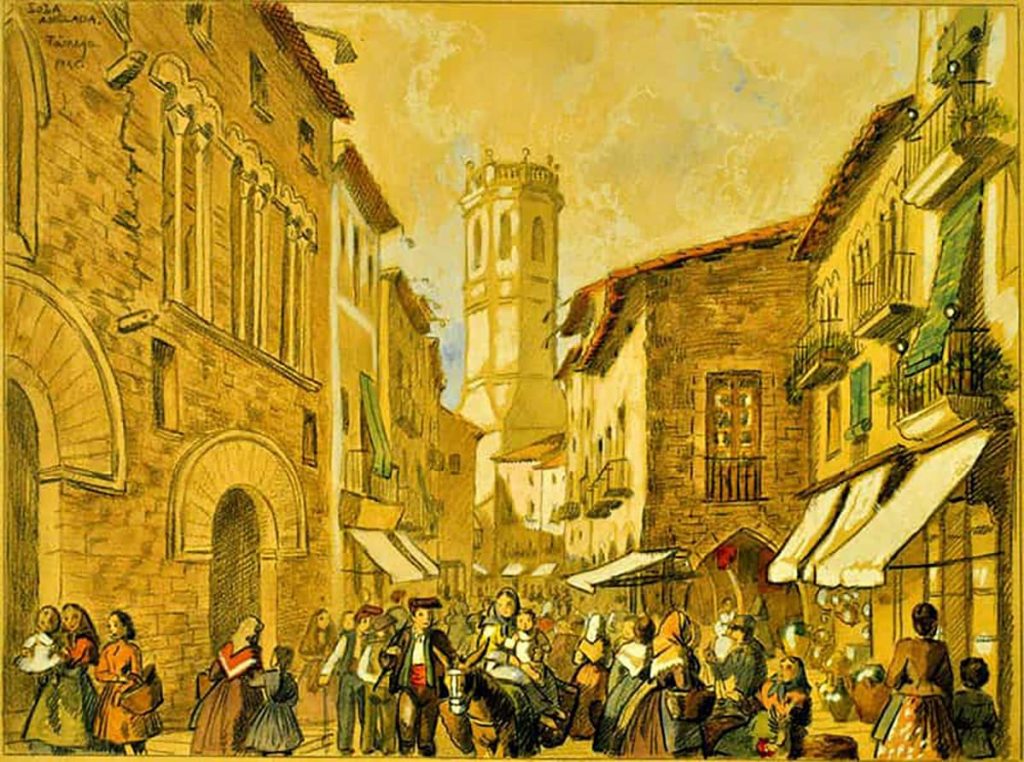 Today is a bright and clear day. We are at the end of winter. In the Pati de Tàrrega, the chestnut trees open and raise their branches to the sky. On one side of the square is the monument to the musician Ramon Carnicer and on the other the monument to the Catalan Countries by Andreu Alfaro.

Carrer de Cervera, also known as El Carme, invites us to delve into what was the walled enclosure of the town. Old stone houses on both sides of the street coexist with new and clumsy constructions. Old shops, new shops and anonymous franchises. Glazed premises, peeling facades and narrow streets. In the background, perpetual and ubiquitous, the bell tower prevails over a blue sky.

Going down to the right, the wide eaves of Cal Segarra stand out, a bourgeois, modernist and devout house of Our Lady of Montserrat, which covers, surrounded by singing angels, the entrance. Further down, attention is drawn to the harmonious façade of the Palace of the Marquis of La Floresta. Slender Romanesque with Gothic elements of beautiful architecture.

Right there, the stone darkened by the years of the Gothic windows of the Sobies Hospital speaks to us of a forgotten splendor. Next to it, the building built where the demolished porches of the Tarragona house of the lords of Càrcer and Sobies stood, reminds us of the memory of the poet Alfons Costafreda.

In front of them rest the porches that go down and connect, with which on the other side of Santa Anna street, they go to Cal Postes, below the bell tower. Arriving at this place, we enter the cozy Plaça dels Àlbers, the old moat of the town, to contemplate the grandeur of the huge bell tower and the simple elegance of the Cal Palau building.

Returning to Carrer del Carme, the porch is narrower and more welcoming, and the modernist building of Cal Bergadà stands out. At the end, touching the Portal de Llevant of the parish church, rises the solid vaulted passage, which serves as the buttress of the dome of Santa Maria de l’Alba dated 1693.

We enter the Plaça Major, on the left hand side the grandeur of Cal Casals with the beautiful wrought iron and stained glass gallery, the historic post-war building of La Caixa, the porches of the street and the Plaça Major, and the rebuilt building of the Town Hall, which on the original façade from 1764, bears the motto of the old Paeria: “Antiqua Tarrega Foelix Villa”.

We end our walk in the middle of the Plaza Mayor. There is a copy of the restored Patio Cross. It is a first-class sculptural work. The original remains can be seen in the Museu Comarcal de l’Urgell, very close by, on Carrer Major itself. 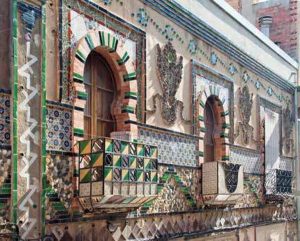