The Birds of the Torre del Codina, Chapter 8: The Goldfinch

> Listen to the song of the goldfinch:

The family of the ocells fringil.lids, are connected and appreciated for the seva habilitat per al cant. The canary is one of the best known to be bred in captivity. Its endemic habitat, where it lives in the wild, are the Canary Islands, the Azores and Madeira.

The goldfinch, also known as the goldfinch, is one of the most popular passerine birds in the finch family. His singing is similar to that of the canary. It is a lively and restless bird, and although it can live in a cage, it is difficult for it to reproduce in captivity.

The main feature of the goldfinch is the showiness of its plumage. The yellow, black and white colors of its small body, and the large red spot around its beak, make it unmistakable to other birds. Legend has it that the red color on their heads dates back to when Jesus Christ was crucified, and the goldfinches tried to pluck the thorns from his crown and were stained with blood.

The song of the cadernera, is a source of animated refilets, fluted and melodious, fast and well-known, that often receive the answer of another congener initiating a musical conversation of multiple intonations, virtuous and beautiful. In Mallorca, metaphorically, the girl who is funny and talks a lot is called cadernera.

The goldfinch is characterized by being a social bird, flying below the margins, with short and fast flights, usually in small or medium groups and always accompanied by its characteristic song.

As its name suggests in Catalan and also its scientific name in Latin, “Carduelis carduelis”, it oftenfeeds on the seeds of thistles, which with its thin, pointed beak, it chooses without puncturing.

Years ago, goldfinches were one of the favorite birds to catch them in the winter with lure and musk on the twig. The males, when they fell clinging to the ropes, were caged, and it was common everywhere to have them at home to enjoy the company of their singing. In 2016, the Generalitat banned the capture of goldfinches, in order to comply with European directives that protect it. The ban on hunting and catching finches is a sign of civilization and respect for the environment and nature.

The goldfinch likes to live near the margins of agricultural plots and among holm oaks, almond trees and olive trees, where it can find plenty of seeds to feed on. Many goldfinches descend from the mountain regions to the plain, to spend the winter between us on the plain, in a more temperate climate.

In the Torre del Codina it is easy to feel and observe them, in the wastelands of the agroforestry areas, full of shrubs and wild herbs, where they find the necessary food.

How could it be otherwise, the popular singularity of the bookbinder has been a source of inspiration for writers, poets and artists.

The goldfinch is present in the mythical poem “The Emigrant” by the poet Jacint Verdaguer:

And finally, one of the most popular paintings by the Dutchman Carol Fabricius is the painting of the gold chain tied with a thin gold chain: “Het puttertje” (The Gold Chain), from 1654. 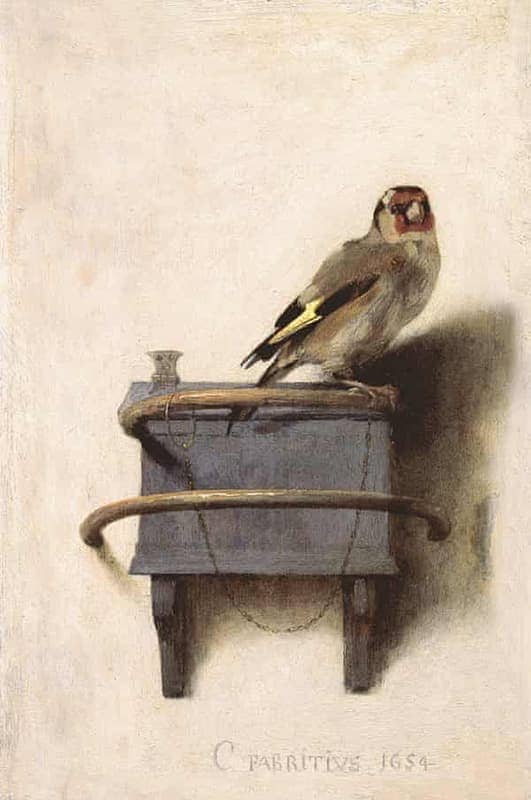 Clipped wings: the tragic true story of The Goldfinch

Only by learning to know our birds will we learn to love them.