What rural life was like in the 18th century

Space helps us to interpret how people lived more than a hundred years ago. 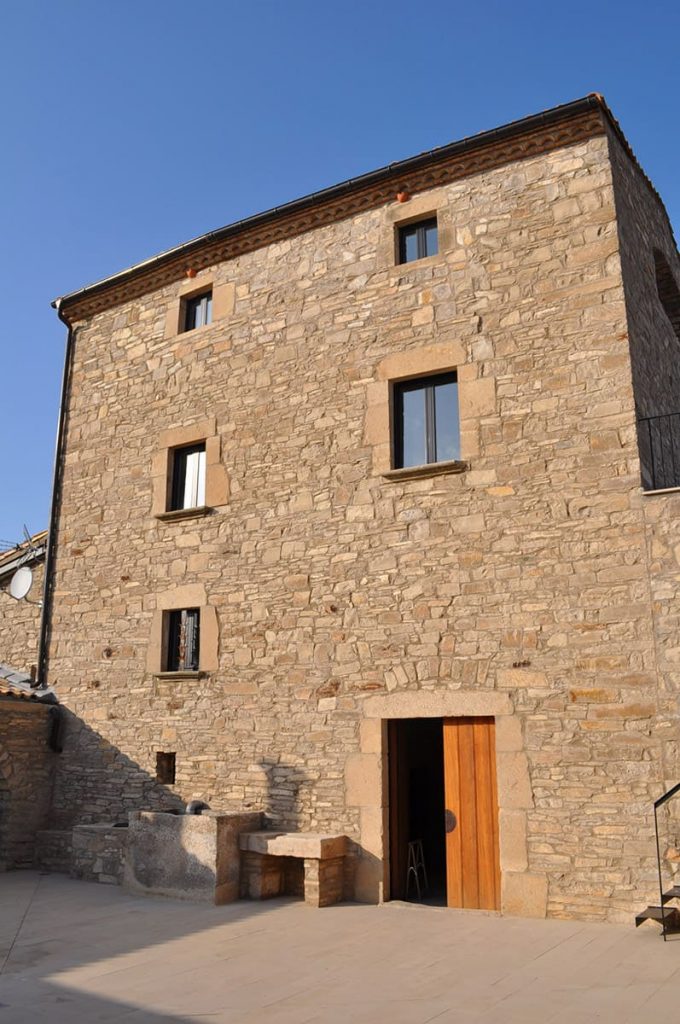 The house has a cistern that collects rainwater, the cellar to store wine, the barn where the pack animals were kept, the corral of cattle and herd, the cups and trulls of wine and grain, the bread oven, the sink to store the oil. The stable preserves the dining rooms of chopped stone; the cups retain their original structure and in the cistern we can see the uprights of the well to raise the water.

The set of spaces and buildings of the Torre del Codina has a clear productive and defensive function. Enclosed on all four sides, it was an easy building to protect. Its privileged location and visible from various places, allows you to have eye contact with other inhabited places in the area.

Currently all the crops on the estate are from Certified Organic Agricultural Production.

The house is mainly structured with the main building, the barn or corral, and the auxiliary buildings. The set has the main house, the cistern, the cellar, the stable, the barn or corral, the two wine glasses with ceramic cairns, the grain cup, the bread oven and the sink to store the oil.

The whole building of the Torre has a clear defensive functionality. Its privileged location, visible from various places, allowed it to have eye contact with other inhabited places in the area.

The Torre is listed as a heritage site of local interest and protected by town planning regulations. During the refurbishment, great care has been taken to preserve the essence, the language of the dry stone and the limestone masonry.

The rural environment of the terms of Talladell, Verdú, Granyena and Granyanella have a rich rural architectural heritage of dry stone, unknown and of great heritage value.

The proportions of the main building are 10 meters by 10 meters, and 12 meters high. It is oriented from south-east to north-west, in order to make the most of the sunlight all year round.

The main entrance to the whole of the Tower leads to a large courtyard from where, on the right, you can access the top of the cups where the honeycombs were used to trample the grapes with your feet. One of the cups has the dock to unload the grapes and be able to pour them into the honeycomb. The two cups, made of pottery, have a capacity to store 70,000 liters of must.

These cups connect to the cellar that occupies the underground part of the main entrance of the house. In the cellar we can see the nozzles that connected to the cups in order to store the wine in vats once fermented.

From the courtyard there is access to the main entrance of the house, which has the old stable on the ground floor, with room for a dozen cavalry or beasts of burden. We can see the chopped stone dining rooms that have been fortunately preserved. We can also see restored a set of necklace, bridle and mule bite. The block has been converted into a games room in the country house.

In front of the courtyard we can see the four arches of the corral. The herd of goats and sheep, poultry and some pigs were kept in the corral. From the corral you could access the outside of the house where there was an enclosed garden that has disappeared and only a wall remained. The corral has been converted into a living room, kitchen and dining room.

Without moving from the courtyard, we can see around it the long channel of chopped stone that collects water from all the roofs to take it to the cistern. In those days, water was a treasure to be reckoned with, as it had to water people and animals that lived in the Tower. Today, all the rainwater is used, and it was drunk in the same house.

To the left of the courtyard is the shed or warehouse where cereals, olives or fodder were stored. It should be noted that in the basement of this shed there is an underground, visitable cupboard, which should have the purpose of a silo.

The old shed spaces have been used on the one hand, as an engine room and heating, and on the other as a heated pool area, bathroom and shower.

If we go to the left from the entrance through the corridor that runs next to the block, we come to a large space where we see the uprights of the cistern well that accumulates rainwater. To the right is the old wood-fired oven, which was used to make bread and is still in use.

From the entrance of the house by the stairs on the right, you access the rooms. The stairs are made of iron and, apart from a stone landing, the steps that were looted about twenty years ago are missing. The first room we find, which is located just above the block, is the place where the medians of the estate lived, where they ate, cooked and slept. The animals provided warmth, which was easy to maintain due to the low ceiling.